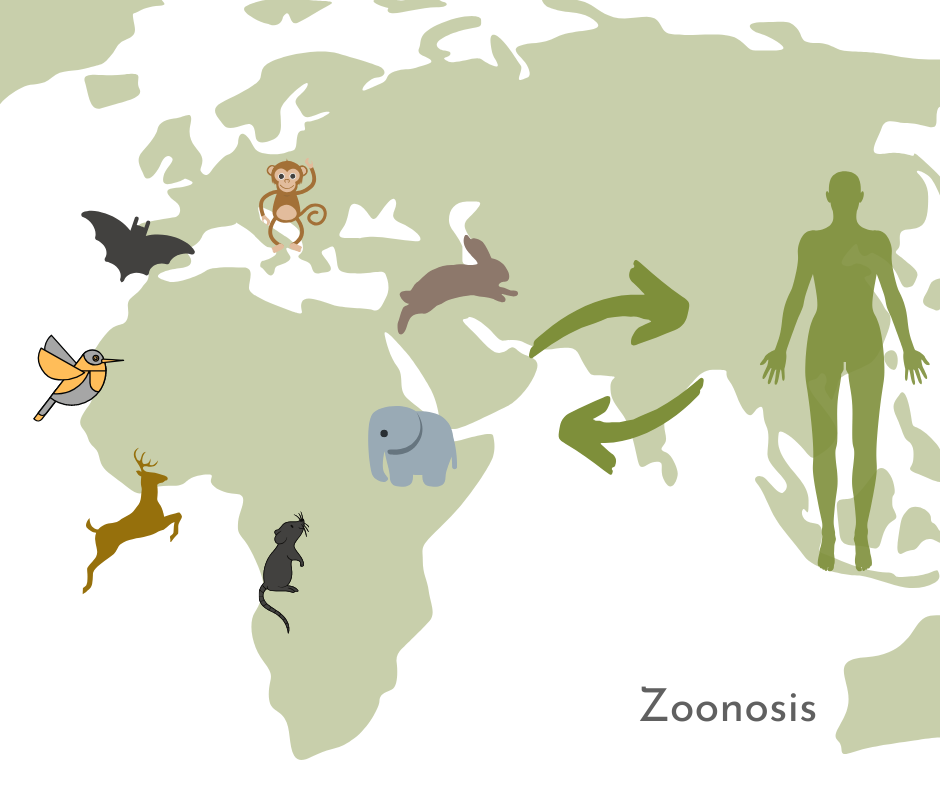 In the wake of novel coronavirus, there is growing awareness that human health is linked both with animal health and the health of the planet as a whole. Corona, HIV, BSE, Ebola, bird flu. Over the past few decades, we have been repeatedly startled by infectious diseases that have been transmitted from animals to humans.

Zoonoses is the technical term for this, meaning all diseases that can be transmitted from animals to people, but also vice versa, from people to animals.

How do they emerge, how can they be prevented from spreading and what do zoonoses have to do with the global extinction?

Zoonoses can be caused through viruses, bacteria, fungi and parasites. They all can be transmitted from animal to humans and from humans to animals. This is possible due to the close contact from humans with animals as pets, livestock, or wild animals. The trade with wild animals, the reduction of ecosystems, factory farming, feeding of meat and bone meal, production and preparation of food products and the hygienic circumstances under which this happens are all factors involved.

Particular at the beginning of a new virus many people die. Over time the mortality rate is reduced, as it is not in the interest of a virus to kill his host. Like all evolutional processes, survival and reproduction is its goal. Therefor the virus mutates over time to create variations not so aggressive towards its host. On the other side, the human immune system learns to handle and fight the virus.

The greatest danger for zoonotic transmissions is among hunters and those who are directly involved in processing the meat. Wild animals at risk of extinction due to human exploitation were found to carry over twice as many viruses that can cause human disease as threatened species listed for other reasons.

The same was true for threatened species at risk due to loss of habitat. Wildlife also shift their distributions to accommodate anthropogenic activities and modification of the natural landscape. This has hastened disease emergence from wildlife, which put us at risk of pandemics because we are all globally connected through travel and trade.“ Wild animals sold in busy markets where animals and people mix present an opportunity for diseases to jump between species that would normally never come together in the natural world. Biodiversity leads to a “dilution effect” that reduces the risk of new infectious diseases.

In diverse ecosystems, individual animal species and their viruses find it more difficult to assert themselves. Almost half of all diseases transmitted from animals to humans since 1940 can be attributed to changes in land use, agriculture, changes in eating habits or hunting (Keesig et.al., Nature, 2010). When forests and other habitats are destroyed, humans profoundly change the structures of ecosystems. Millions of animal and plant species, but also parasites, viruses, fungi and bacteria live in our forests alone. They are in balance with the species with which they have developed. Even if the pathogen can be dangerous for humans, it does not necessarily have to trigger disease symptoms in its animal host. The strength of the system is its diversity. If we penetrate these ecosystems or even destroy them, pathogens lose their hosts and look for a new one – it is not uncommon for a single person. This event is called spillover and can subsequently trigger the infection of thousands of other people. 60 percent of all infectious diseases in humans are zoonotic.

The Ebola outbreak in West Africa was the result of forest losses leading to closer contacts between wildlife and human settlements; the emergence of avian influenza was linked to intensive poultry farming; and the Nipah virus was linked to the intensification of pig farming and fruit production in Malaysia. One of the most devastating viruses of all time for humans probably jumped from the pet. Spanish flu killed an estimated 50 million people worldwide in the early 20th century. The virus responsible found its way to humans in the Midwest. A related pathogen appeared in 2009. H1N1, the swine flu virus, killed an estimated 280,000 people worldwide.

Facts, scientist put together for UNEP:

The interaction of humans or livestock with wildlife exposes them to the risk of spillover of potential pathogens.

For many zoonoses, livestock serve as an epidemiological bridge between wildlife and human infections.

The drivers of zoonotic disease emergence are changes in the environment—usually the result of human activities, ranging from land use change to changing climate; changes in animals or human hosts; and changes in pathogens, which always evolve to exploit new hosts. For example, bat-associated viruses emerged due to the loss of bat habitat from deforestation and agricultural expansion. Bats play important roles in ecosystems by being night pollinators and eating insects. Ecosystem integrity underlines human health and development.

Ecosystem integrity can help regulate diseases by supporting a diversity of species so that it is more difficult for one pathogen to spill over, amplify or dominate.

This article is based on informations provided by the United Nations Environmental Program (UNEP) and the Max Planck Society.